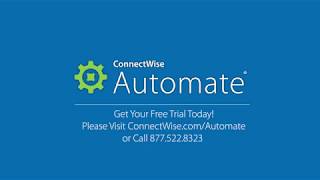 "By far the best RMM in the network of RMM"

Comentarios: Overall, we have been happy with connectwise automate. After coming from Teamviewer, Connectwise is a very robust system that can do way more than we even have the knowledge or time to make happen. Very happy with the software itself.

Puntos a favor: The best part about Connectwise Automate is the amount of power that it has. We are able to deploy auto run scrips on our very critical infrastructure. The systems are always monitored for down time and automate sends out an alert any time there is an issue. The control console is easy to use and even non-technical users are able to remote into our customer's systems to see what they need. Scripting is robust to say the least.

Contras: Ticketing is a challenge in this platform. It is included, but isn't a very customer friendly interface to work in. Tech support is a challenge to contact and they don't consider much an emergency for support purposes. Being cloud managed, we find that it is slow for time to time and requires a bit more patients than we would prefer. The management console is not Mac OS supported, so using this in an Apple environment can be challenging. You are limited to the web version and it's functions are limited.

Comentarios: We are using Connectwise Automate for taking care of customers on a managed service contract.

Puntos a favor: There are many, many features in Connectwise Automate that will help you help your customers with their computer needs.

Contras: Although the software is very feature rich, it seems very cumbersome and not easy to use from day one. In almost every step, we have had to take classes to figure out how to do things.

"Should be call "Connectwise Autodraft""

Comentarios: The business is a con. They tell you they have a "guarantee" which they make impossible to obtain. will continue to bill you regardless fo whether the product works or not.

Puntos a favor: The software has its pros (connectwise screenconnect is the only good thing). The automation will automatically restart services or auto-approve and apply windows update on a schedule. When it isn't crashing or causing servers to crash that is.

Contras: It CONSTANTLY crashes. It will cause servers to crash. Only some automation features work. No support is ever avaaible to resolve issues. The ones that do respond don't know their own product.

Comentarios: Connectwise Automate is a critical part of my business that I use. I could not work without it and I really enjoy working with this tool!

Puntos a favor: I really like the features that Connectwise Automate offers. The ability to remotely patch servers and endpoint devices is excellent.

Contras: The only issue we have with this software is the customer support and occasional instability of the software.

"RMM to the stars"

Comentarios: We used this tool when it was LabTech - and even in those days there was no comparing this to any other RMM platform. For years it had the edge in so many ways. To those willing to learn it this tool was capable of being the entirety of your platform for doing business!

Puntos a favor: The feature set has been astounding from day one.
With the big rebrand and integration with ConnectWise Manage the duo are now all that much better, complementing each others previous, non-focused features.

Contras: Truly forward progress was the main issue. During the time we actively used LabTech/Automate was during the transition years of the name and aesthetic. Things are definitely driving into the right, unified direction for all of their tools and that is exciting to see!
Learning the tool, like most ConnectWise products, can be daunting but there are lots of resources to pull from and well worth the investment. Again, I suspect due to the years of bringing the tools together, Automate seemed to somewhat stall/lag on added features for awhile. They certainly had the most initially so it wasn't a drastic fall-behind, but new tools were taking the slow moving to catch up and the market is certainly competitive again.